30 employees of the Clinical Center of the University of Debrecen received the Presidential Certificate of Recognition and the Reward Award for their outstanding professional activities. The award was presented by Professor Zoltán Szabó, President of the Clinical Center, at Wednesday’s Semmelweis Day ceremony in the Hall of the University’s Main Building.
Today, with the third wave of the coronavirus behind us, it could not be more topical to commemorate the work and heritage of Ignác Semmelweis, revered as a benefactor of humanity and a savior of mothers, said the President of the Clinical Center in his solemn speech.

The professor recalled that Ignác Semmelweis had discovered at the beginning of his career that the frequent deaths of parent women were caused by pathogens unknown at the time, so he stressed the importance of thorough hand washing. However, with his finding beyond his age, he provoked the rejection of the profession, as he preached doctrines unknown to the medical community until then.

The time of recognition came only much later, after the death of the genius. Ignác Semmelweis can now be proudly called the emblematic figure of 19th century medicine. Even though 200 years have passed, his words and teachings are making sense again. We had no idea that in the rapidly evolving world of the 21st century, his thoughts would be so topical 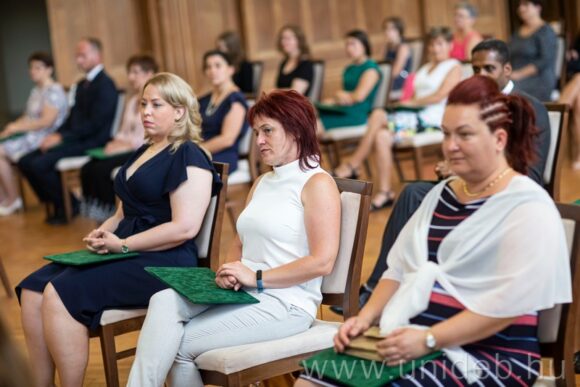 The President of the Clinical Center stressed that the disease caused by the coronavirus has been controlled together, but at the same time the continuing danger must not be forgotten and everything must be done to avoid another wave of epidemics.

Zoltán Szabó added that despite the difficulties of recent months, the Clinical Center has undergone a definite development both in terms of staff expertise and cooperation, as well as at the organizational level, meeting the requirements of continuous renewal and the challenges of the changing environment.

Physicians, nurses and other health care workers, committed to high quality healing and carrying out their profession as vowed, have played and continue to play a key role in this. Recalling Semmelweis’ work, it can be stated that he fought for the lives of others without consideration, without sparing his own health and life. The staff of the Clinical Center has done the same in the recent period. They fought the epidemic without sparing their own health. Despite their exhaustion and strain, they have set an example in seemingly hopeless situations.

On the occasion of Semmelweis Day, the head of the Clinical Center awarded a Presidential Certificate of Recognition and a Reward Award to employees who performed their duties with outstanding skill and diligence. This year, 30 have received this recognition.

At the ceremony on Wednesday, the President of the Clinic Center thanked Lieutenant Colonel Ádám Pálma, the Hospital Commander of the Clinical Center Nagyerdei Campus, Lieutenant Colonel Csaba Kajatin, the Hospital Commander of the Gyula Kenézy Campus and their deputies, Major Árpád Tóth and Jónás Imre. Professor Zoltán Szabó emphasized that their cooperation and ongoing support greatly contributed to the outstanding anti-COVID activities of the Clinical Center.

Miklós Kásler, Minister of Human Resources, presented a Ministerial Certificate of Recognition to the staff of the Clinical Center for Medical Microbiology for their outstanding professional activities on the occasion of the national holiday on March 15. Due to the spring epidemic situation, Andrea Kisné Deák, Assistant of Medical Microbiology, was now able to receive the diploma from President Zoltán Szabó on behalf of her colleagues at the Semmelweis Day ceremony, on the basis of a ministerial authorization.

NeurotechEU: “Nervous” Scholars of the Humanities

Another Lendület Research Project at UD