Zoltán Varga, Head of the Department of Biomathematics at the Faculty of Medicine, won a bronze medal at the European Triathlon Championships in Olsztyn, Poland. In the competition, which is the same as the Olympic distance, this time the athlete had to fight not only with his teammates but also with the weather conditions.

In addition to the youth-age riders, a European Championships for the elderly and athletes were held at the end of May in Olsztyn. One of the lecturers of the University of Debrecen, Zoltán Varga, the head of the Department of Biomathematics of the Faculty of General Medicine, also started in the continental competition, and he competed in the AG50-54 category. 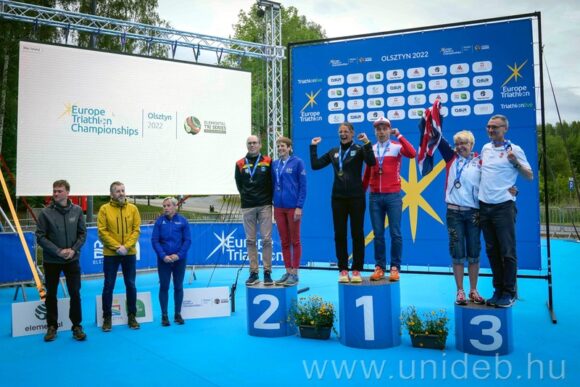 He told hirek.unideb.hu: neither the signs nor the competition conditions were the best, nevertheless he reached the podium at the European Championship, bringing out the maximum. Competitors had to swim 1,500 meters, cycle 40 kilometers, and run 10 kilometers.

The weather wasn’t very friendly, we were swimming in 15-degree water, and the air was only 13 degrees, and sometimes the rain didn’t make things any easier. Because of this, we were quite cold on the bike, our limbs were numb, and I recovered from a mildly symptomatic Covid infection shortly before the race. Fortunately, despite the circumstances, the race went well and I managed to win the bronze medal in my age group,

Zoltán Varga finished third in the European Championship field behind a Polish and a German competitor at 02:12:51. A total of twenty-nine of the thirty entrants in the EB AG50-54 age group were reached.

The full scoreboard is available at this link.

New academic doctors at the University of Debrecen

Tribute to the renowned agricultural professor at the University of Debrecen